Unfortunately, universities and their staff don’t have infinite time and resources dedicated to responding to student feedback (despite this being the ideal scenario). When you only have two hours in a meeting, and a bajillion issues raised by students, it is important that representatives know how to prioritise and filter feedback to make the most efficient use of both their time and staff’s time.

During my training at the UCL Students’ Union, I came across three helpful criteria that student representatives can use when determining which feedback to bring up in a meeting or to escalate on Unitu. They are: 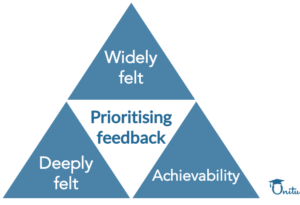 The first question to ask is whether the issue is widely felt across the course or the department. How many students have the same issue? If a great number of students feel the same way about a particular issue, this is strong evidence of its severity.

On the other hand, if only a handful of students have expressed their concerns, this could indicate that the issue is more personal in nature. If that’s the case, it might be better practice to signpost the student(s) to the relevant services and advise them to raise the issue directly themselves.

For instance, take this example:

“My tutorial room in the first term was right next to the campus football field, which meant that I could easily go to my tutorials straight after practice. But this term, they have allocated me to a different tutorial room, which will take me more than 20 minutes to walk to!”

The above matter only relates to the student who raised it, as such it might be less appropriate for representatives to raise it in a meeting setting.

That being said, even if an issue is raised by only one or two students, it might indicate that a wider, less obvious trend is lurking in the department. This is where the representative’s role in opinion research comes into play – they should conduct further inquiries and ask the larger student community whether they have encountered similar problems.

The ‘widely felt’ criterion can easily be demonstrated quantitatively. In a survey, this essentially corresponds to how many students tick ‘Yes, I agree that this is an issue,’ and on Unitu, this refers to how many upvotes a post gets. Before a meeting, representatives should analyse the responses, determine what proportion of respondents feel the same way, and if they are satisfied with the number, present those figures to staff as evidence.

The next question to ask is how deeply do students feel about the issue? Does the issue significantly impact their student experience? An issue might very well be felt by the entire cohort, but if it doesn’t bother students too much or has a negligible impact on their learning, it might not necessitate escalation especially if there are other more pressing matters to be dealt with. For example, a lecture theatre might be slightly draughty, but not to a level that it significantly affects students’ ability to concentrate.

Whether an issue is sufficiently deeply-felt could be a judgment call on the representative’s part, but it could also be demonstrated quantitatively. On a survey, a Likert scale could be used, for instance, “On a scale of 1 to 5, how strongly do you feel that the issue (e.g. delays in marking assessments) has impacted your ability to do something (e.g. write good essays)?”

Lastly, representatives should consider how achievable or winnable the solutions are. Feedback that is raised should have at least some slim chance of success, and such that representatives feel confident that they can achieve some sort of compromise.

Unlike the previous two criteria which can be demonstrated quantitatively, achievability can be more subjective and may depend heavily on context. For instance, prior to industrial action and COVID-19, requests for refunds or fee discounts would almost certainly be considered an unwinnable feat. However, because the significant disruption those events have caused to students’ year-long experience, the prospect of having fee reductions doesn’t seem so far-fetched anymore. Representatives should exercise their discretion carefully, by taking into account the different contextual and policy factors.

A technique known as ‘cutting the issue’ could be employed by student representatives. Essentially, this means breaking down an issue into smaller, more achievable components. For example, even though it is highly unlikely that institutions could give everyone a First class when they graduate, representatives could argue for more academic support to help students attain their highest potential.

More uses than one

Whilst these three criteria are helpful tools in prioritising feedback, they can also be used as guides when structuring the evidence of student feedback. In addition to saying what the issue is, representatives need evidence to back their claims. These three criteria (how many students have expressed the issue, how deeply students feel about it and how achievable it is for staff to implement a solution) are useful in presenting such evidence in a systematic way.