The National Student Survey (NSS) is an annual survey taken by university and college students across the UK. The survey asks undergraduate students in their final year to provide honest feedback about the academic experiences in their respective courses, namely around quality of teaching, learning opportunities, academic support, assessment and feedback etc.

In 2016, the NSS introduced a new section of questions, under the heading ‘Student Voice’, which include the following statements:

23. I have had the right opportunities to provide feedback on my course.
24. Staff value students’ views and opinions about the course.
25. It is clear how students’ feedback on the course has been acted on.

Traditionally, the national mean score for the Student Voice section has been one of the lowest. In both years 2018/19 and 2019/20, Question 25 was the lowest scoring question for part-time students in England, with a score of 47. And for English full-time students, the score was slightly higher at 62 in both academic years, but it was nonetheless the second lowest scoring statement on the survey.

In response to the disconnect between students and staff in higher education, Unitu was created in 2014 by our co-founder and CEO, Anish Bagga. As a former course representative at the London School of Economics and having done his dissertation on the topic, he recognised the amount of effort staff in college departments were trying to put into improving the student’s experience, but they lacked the effective mechanisms to close the feedback loop. This prompted Anish and his team to design a new way of communication, in order to bridge the gap between students and staff and enable them to effectively collaborate on improving their academic experience.

It has been six years since the start of the Unitu journey, and we would like to use the 2020 NSS results announcement as an opportunity to reflect on how far our partner institutions have come in empowering their students’ voice.

In 2015, Swansea University, one of our earliest partners, undertook an appraisal identifying suitable options to address their student feedback challenges. Out of a number of options, they felt Unitu was best suited to support them in achieving their student experience goals. According to Swansea University’s Head of Student Partnership and Engagement Services, Debbie Ricci-Jones,

“Unitu has been an ally in driving positive campus changes, from student wellbeing to catering and from sustainable transport to study and social spaces. It has also helped to increase NSS metrics, with improvements seen in the Learning Community and Student Voice categories.”

Unitu was officially launched in 2017/18 and it has been credited for helping the university create a more engaged community, through a dynamic process to address issues that affect the student experience. Patricia Xavier, Student Engagement Lead at the Swansea University Engineering College, which received a high average Student Voice score of 81, said,

“Our NSS scores on Student Voice were fantastic this year, I think Unitu has played a big part in that as the change was biggest in our college where we use it most actively.”

Another one of our success stories was the University College London (UCL) Department of Computer Science, with our pilot implementation beginning as far back as in 2016/17. In an earlier article, we mentioned how after a year since engagement with Unitu, the Department was able to see a 14% increase in its NSS Student Voice scores. As  Departmental Tutor, Dr Graham Roberts said,

“Thanks to this platform, last year we were able to respond to students’ issues usually within 48 hours. We believe this intervention has led our Student Voice NSS scores to increase by 14% in 2018 compared to the year before.”

How did our partner universities do in 2020?

Suffice it to say, 2020 has been an odd year for the higher education sector. The year brought disruption to the sector at a scale that we have never seen before. However, despite the enormous challenges and difficulties present, our partner universities were able to see improvements to their Student Voice scores.

On average, our all our partner institutions saw rise in their Student Voice questions on the NSS every year. 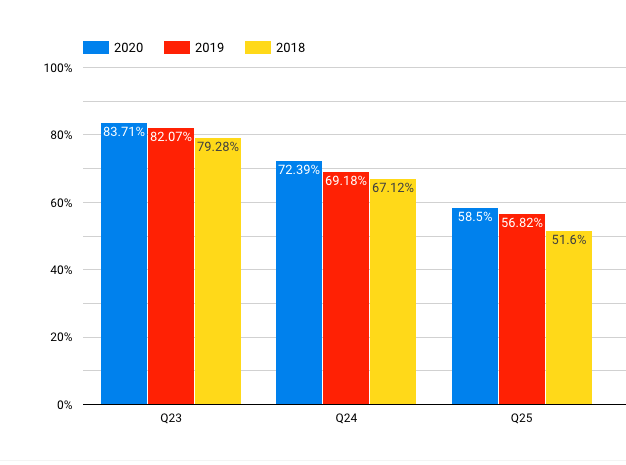 Here are a few highlights:

Three years since using Unitu, the UCL Department of Computer Science continues to experience a growing trend in all its Student Voice scores. Just in Question 24 (“Staff value students’ views and opinions about the course”) alone, the Department witnessed an 11-point increase from the previous year. But the Department of Computer Science was not the only department that saw a positive impact – the same upward trend can be seen in other UCL faculties who joined the Unitu in 2019.

In its first year of implementing Unitu, the UCL Faculty of Laws received increases across all three Student Voice statements, with an average rise of 7 points for each question. Remarkably, the Faculty was able to raise its score in Question 23 (“Staff value students’ views and opinions about the course”) to an impressive 92!

The London School of Economics and Political Sciences (LSE) Department of Law also witnessed jumps across all boards. Notably, Question 23 received a significant 15-point increase from 2019. There was also a 4-point and 6-point increase on Questions 24 and 25 (“It is clear how students’ feedback on the course has been acted on”) respectively.

“I think Unitu’s a really good system and I want us to keep using it.”

But it was not just staff who had good things to say. Yousif Ali, a student and the president of the UCL Medical Students’ Association, told us,

“I think Unitu has really made students interact more with staff… It gives a platform for students to raise concerns in a safe space and also allows for discussion between students on a dedicated platform.”

In 2020, the UCL Medical School received a 4 point increase on average in its Student Voice scores.

St George’s, with its predominantly medical student population, was also able to maintain a high Student Voice score throughout. The highest score they received in that section was Question 23, with an impressive 87!

What did students think about Unitu in 2020?

Between 13th May to 28th May 2020, a survey mirroring the questions on the NSS was sent out to all Unitu student users to ask about their experiences using the platform. A total of 536 students responded, and the results revealed that the percentage of students reporting that they had the right forums to provide feedback, could see how staff value their concerns and could clearly track how their feedback has been acted on through Unitu, was higher than the national Student Voice average on the NSS. 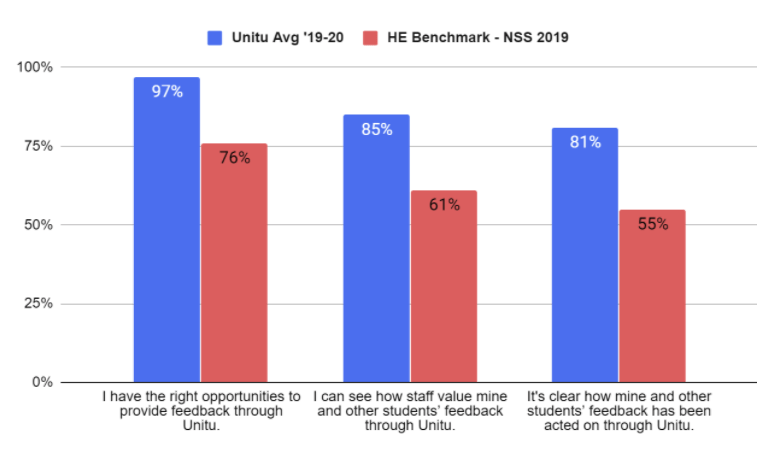 Overall, we are beyond excited to see our partner institutions witnessing improvements on the NSS, specifically on student voice. It’s demonstrates clearly how they have put the student voice as a high priority.

Undoubtedly, the new academic year will present the higher education sector with unprecedented challenges, but we are confident that Unitu will continue to help universities navigate and capture student voices in order to improve the student experience.