But seriously, what does a student representative do?

“Representing students’ interests”, “raising the student voice” and “working closely with staff to build a better education”. These are phrases commonly heard when describing the responsibilities of a student representative, but are they meaningful?

The importance of having a clear and comprehensive role description is often overlooked. Students need to know the expectations that are required of them and assess their suitability for the position, before making the (scary) decision to nominate themselves. A clear role description therefore has the effect of encouraging student nominations, as well as helping unions plan their training and support systems more effectively.

Yet, having read through the role descriptions for programme representatives in several students’ unions’ handbooks (that is, if there is one), I noticed that whilst some of these descriptions offer a good explanatory framework, there is still room for improvement in terms of clarity and structure. Take these examples: 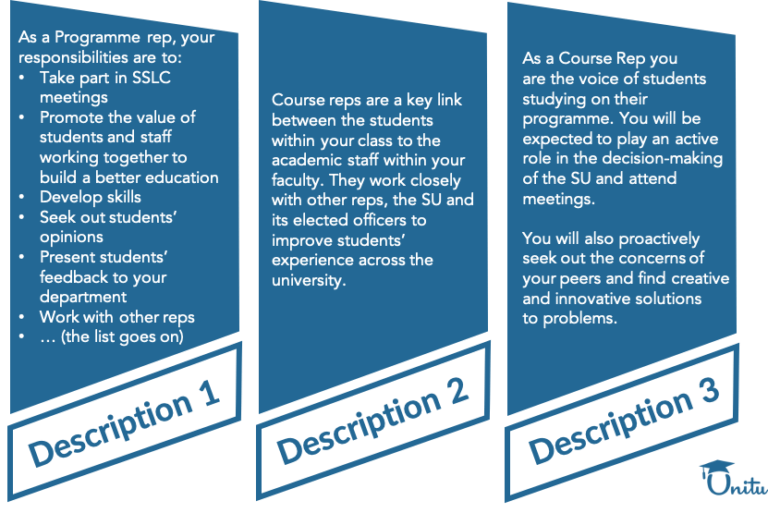 The first example, whilst comprehensive, consisted of a long list of bullet points with no clear and logical structure. The phrasing of the second one is imprecise and sometimes vague. And the last example doesn’t portray a complete picture of what a representative might do (for instance, it makes no mention to the representative’s role in closing the feedback loop).

In this article, I hope to provide a typology of the expected responsibilities of a student representative. They can be broadly categorised under four headings:

The first task of any student representative is to inform the student body of their successful appointment, make themselves well-known to their peers and provide ways in which students can contact them in the future.

Because of this, representatives must equip themselves with adequate knowledge of the different advice and support services available. This is so they may signpost their peers to the appropriate facilities, if the matter falls outside their scope of competence. Most of the time, this will be their programme’s administration team. But for matters which are more specialised, such as accommodation, wellbeing or library resources, institutions usually have in place particular offices that representatives can refer their students to. Representatives cannot (and should not) be expected to know the answer to every single question, but they should have a clear understanding of the structures of their institutions.

Not only are representatives considered important information facilitators by students,, representatives are also often tasked by staff to relay information to their cohort. This may include reminders about faculty-wide events, concerns about plagiarism or simple changes to timetables.

Representatives need to tune in and have a general awareness of what’s going on in their cohort. This is not often difficult if representatives go about with their usual student lives and be attentive to any comments made by their peers. Another way in which representatives can pick up issues is by analysing past meeting minutes from student-staff committees (if they are available) and seeing whether previously raised issues have yet to be appropriately addressed.

If an issue becomes apparent, representatives should then conduct research into what students actually think. After all, it might very well be that the issue isn’t sufficiently widespread enough to be brought up in a meeting (for example, if an issue is of a personal nature and only affects one or two students, it might be better to signpost them to the relevant facilities).

The most traditional way of doing so is through conducting surveys. But getting students to engage with their university inboxes can be the most challenging problem any representative will ever encounter. Therefore, representatives should make use of a wide array of techniques when gauging students’ views on a particular issue. For instance, representatives could rely on Unitu responses, hold weekly drop-in sessions, or even approach students personally. Having diverse sources of data can strengthen the evidence put forward to staff, and also help reduce ‘feedback fatigue’ amongst students.

In fact, after my department eventually adopted Unitu, I barely relied on surveys anymore. By glancing the number of upvotes or downvotes any given item receives, representatives could immediately understand where students stand on a particular issue. And instead of inventing my own sets of questions, as one would when drafting a survey, students can come up with their own items as and when issues arise.

This is perhaps the most familiar function of a course representative. Systems advocacy is essentially an attempt, whether successful or not, to change an existing rule or policy in the institution. The most passive version of this function sees representatives as a ‘data source’. When a faculty or department wants to roll out a new initiative, they might invite representatives along to meetings and consult them in an effort to obtain student input. In some cases, representatives may be asked to vote as part of the decision-making process. In addition, they might also be asked to shed light on other student-related matters. For example, I was often asked to suggest reasons why the institution scored lower on particular sections in the National Student Survey (NSS). The responses I gave would feed into the university’s planning on improving those scores.

A more active version though, sees representatives as more than just respondents, instead they initiate the transformation process and take on a more leaderly role. Representatives, usually in committee meetings, will present their findings of student views on a subject. They will make their case on why the institution should turn their focus on the matter at hand. And finally, suggest possible solutions to the problem.

Although it is not wrong to perceive systems advocacy as a process occurring in the meeting room, representatives also have the authority to suggest changes anytime throughout the academic year. In fact, this is the most feasible option when matters are time sensitive. This can be done by simply emailing staff when a matter arises (after having done some surveying) or setting up regular drop-in sessions with staff members.

There are two aspects to this function. Firstly, representatives should be willing to help staff members put plans into action. For instance, they can raise awareness of the new strategy and monitor its reception amongst the student body. Updates and follow-ups can be provided as a means to suggest improvements and report on effectiveness.

Secondly, and often overlooked, representatives must ‘close the feedback loop’, that is to relay staff responses to student issues back to their peers. This is an essential step in the information cycle. Not only because it tells students that representatives have done their job, but it also instills a sense of confidence between staff and the student body. Like at the opinion gathering stage, the representatives at my faculty used to close feedback via traditional methods of communication, such as email or social media. But now, these methods have been made obsolete since both our responses and staff responses can be seen in real time on the Unitu platform. 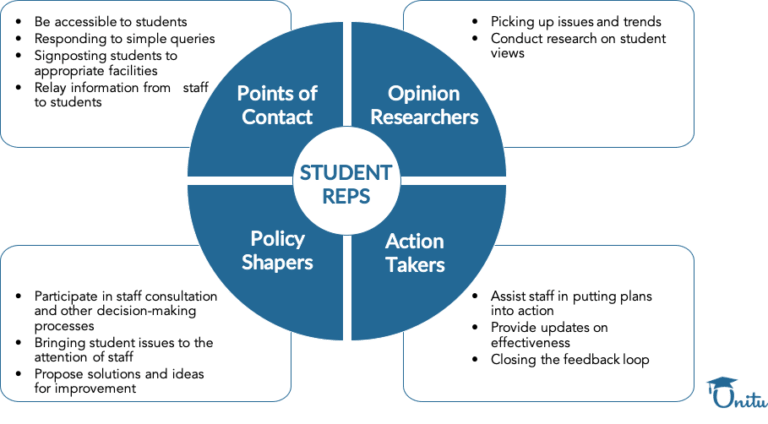 The role description suggested above is made to be generic and applicable to most, if not all, institutions. It will be up to individual students’ unions and departments to contextualise these descriptions in their own educational structures, to enhance clarity in their expectations of representatives. The suggested description is also meant to be a floor, not a ceiling of what students representatives can do. There is much room for representatives to exercise their creativity and innovative spirit to improve their respective learning communities.

Have a look at our very own rep description: 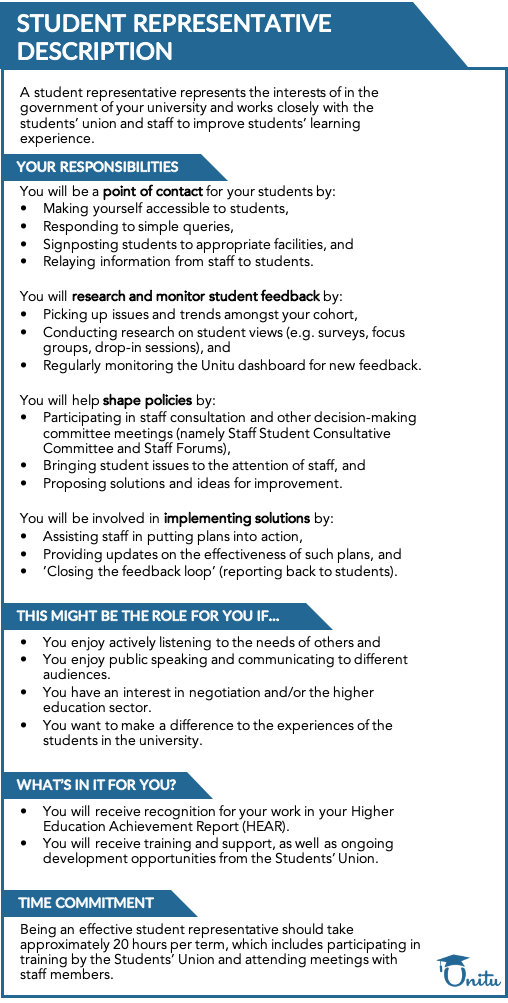 Insights on how to excel as a Student Union President 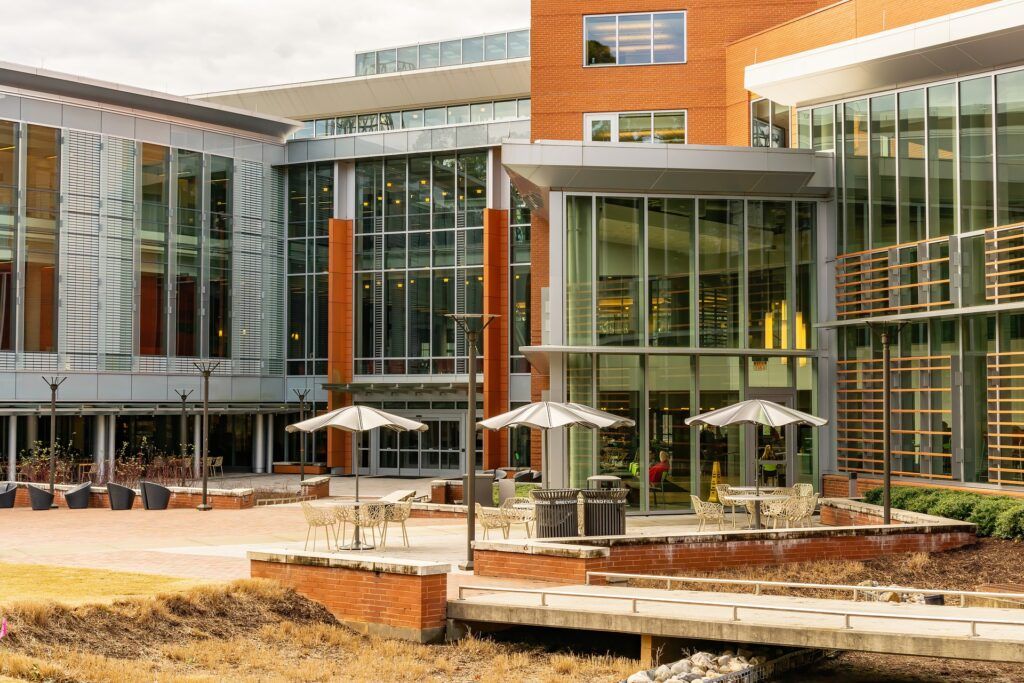 Interview with a Union Development and Democracy Officer 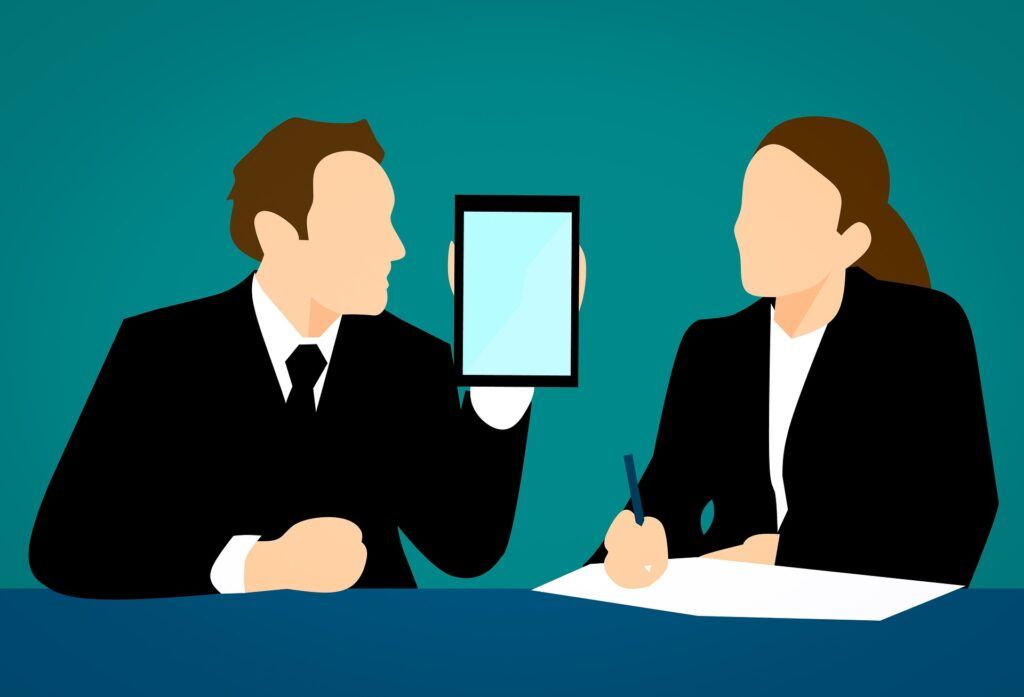 How to maintain Student Satisfaction? 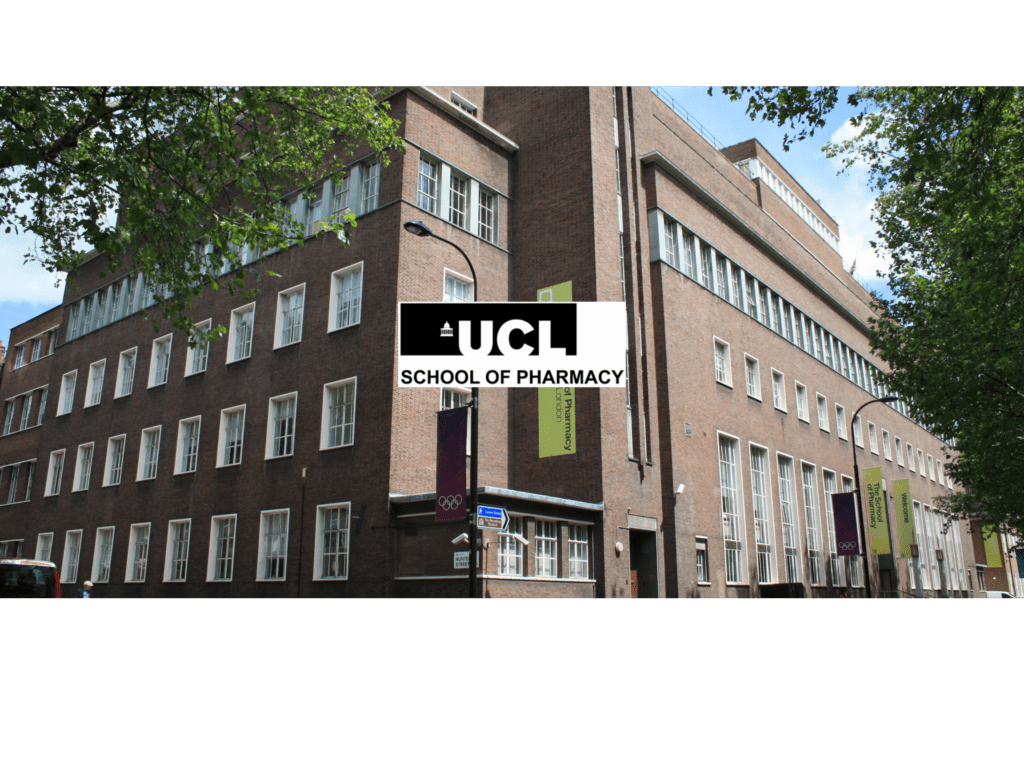